Home / All products/ Firesteel No. 2 (English) 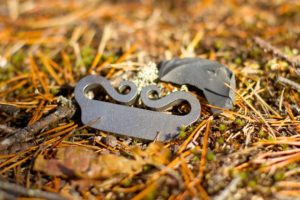 The Anglo-Saxon period was a time of great upheaval in what is now modern-day England, the largest and most populous of the four countries which make up the United Kingdom. During this period, it was vital that every single person knew how to survive if they were unexpectedly turfed off their land by invading marauders.

At Flint and Steel, we are acutely aware that one of the most important survival skills to learn is that of fire making. In the Anglo-Saxon period, firesteels like the one you see on this page were prevalent throughout the British Isles. Owing to the significance of iron-based products, Anglo-Saxon blacksmiths were held in extremely high regard.

We produce working replicas of this early English design from high carbon steel forged over a natural charcoal-fuelled fire. You can see that the striking section of this firesteel is particularly large, making it slightly heavier than other designs but also slighter safer for your fingers.

Much like other firesteels from this part of the world, our English firesteels are symmetrical in fashion and thus are balanced in weight. All this means is that primitive fire making is easier than ever with this kind of fire striker.

There's nothing more quintessentially English than enjoying the warmth and comfort of fire while sitting around the hearth in a traditional stone cottage. This English firesteel comes with a piece of high-quality flint stone which can be used time and time again to produce bright and hot sparks.

Whether you want to buy firesteels for a seasoned camper or a novice Boy Scout, you'll find that our Flint and Steel kits and steel strikers make the perfect outdoors gift.

Take a look at our instructional videos below to find out how easy it can be to make a primitive fire.

No products in the cart.